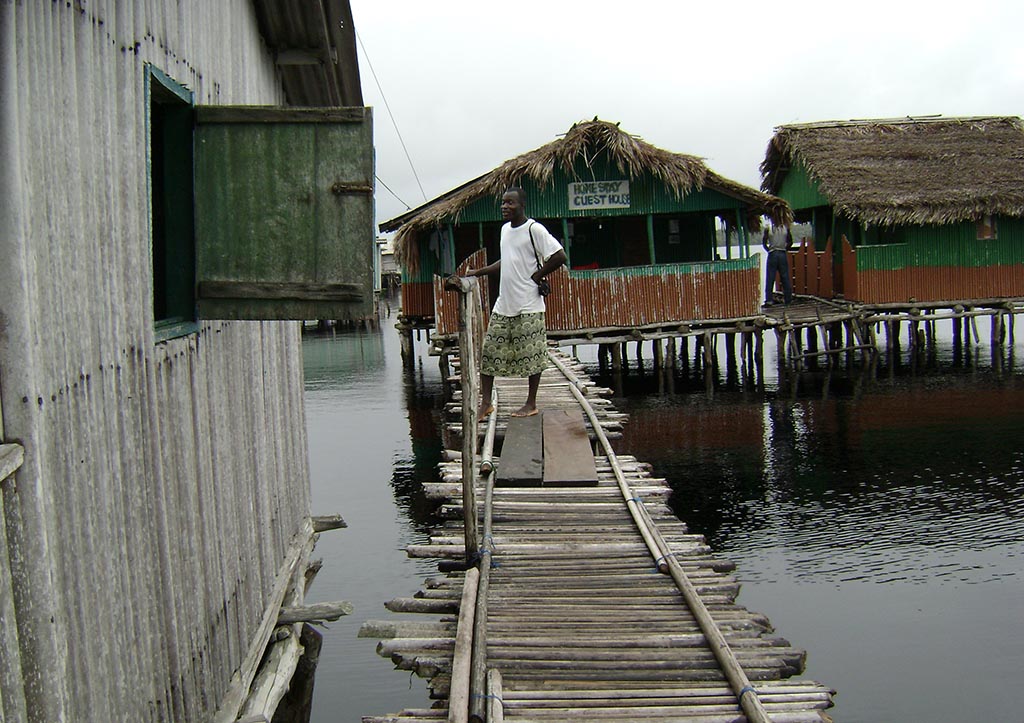 The settlement of Nzulezo, the “Village on water”, is located 90 kilometres west of Takoradi in the Jomoro District of the Western Region of Ghana. Nzulezu is a Nzema word which refers to “surface water”. This very unique village is built on stilt in the Tandane Lake. Nzulezo is one of the Amasuri Wetland, a ramsar site and the largest inland swamp forest in Ghana. The Wetland is a habitat for a variety of animals like monkeys, crocodiles, marine turtles and fishes. Nzulezu also represents an outstanding interplay between man and the environment.

Oral history has it that the village was constructed some five (500) hundred years ago by migrants from Walata, a city in prehistoric Ghana Empire which was the earliest of the Western Sudanese States. It is believed that the the early settlers or the ancestors were led there by a snail. The snail is therefore a totem and revered by the people of Nzulezo. The only other people in the West African Sub-region who live on a stilt village are the Ganvie people of the republic of Benin.

The Nzulezu stilt village has a total population of about 600 people. The main occupations there are farming, fishing and the brewing of local gin (Akpeteshi). The village is ruled by the chief and elders who set out rules and regulations to guide behaviour in the village. The chief preside over criminal offences and other unruly behaviours in the community. Nevertheless, felony crimes are referred to the formal courts system for adjudication. The tribe at Nzulezo are very conservative and do not accept intermarriages with other tribes.

Since the year 2000, the commencements of tourism activities in the Amanzuri wetland, a number of infrastructural developments have been carried out which though have been designed for tourism growth, have turned out to be public goods. These include the construction of 1.4 kilometre of a 2 kilometre canal from Beyin to Nzulezo; a paved landing bay of granite stones, grassed banks and a 140 metre wooden walkway from the main road to the landing bay. In addition, these facilities facilitate school attendance and transport of goods from and to the market. The re-construction of the 312 meter main walkway in the stilt village using durable timber including Borassus palm and Kussia and the creation of nature trails in the wetland are other developmental efforts undertaken. The Nzulezo Village Amansuri Conservation and Integrated Developemt (ACID) Project currently functions under the auspices of the Ghana Wildlife Society and Ghana Tourism Authority.