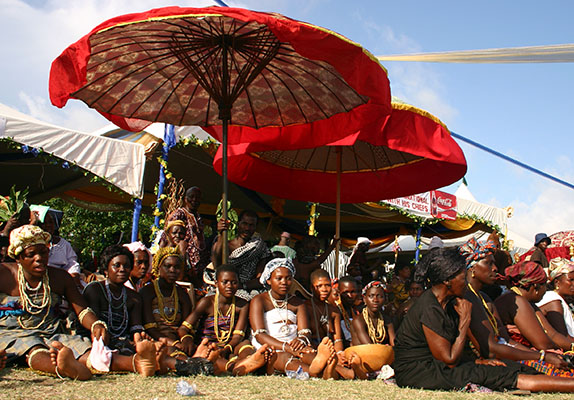 Ghana pulsates with life. From the bustle of downtown Accra to the atmospheric adobe villages of the north, from the ancient Kingdom of Asante to the mediaeval mosques of Larabnga and Bole, it is a country whose immense cultural diversity both thrills and fascinates visitors, drawing them into a daily rhythm that is uniquely and unmistakenly African. A common feature of all Ghanaian cultures is a love of festivals. Barely a week goes without one or other town or village holding its major annual celebration, while everyday personal events such as funerals, name-giving ceremonies and weddings tend also to be imbued with something of a carnival atmosphere.

The normal starting point for exploring Ghana is the historical capital Accra, one of the safest and most navigable of African cities, and brimming with interest. Accra’s atmospheric older quarters Usshertown and Jamestown are characterized by an architectural cocktail spanning several centuries, spiced with striking landmarks such as the 17th century Osu Castle and Jamestown Lighthouse, the more modern Independence Arch and Nkrumah Mausoleum, and the lively fishing market. Modem Accra is epitomized by Cantonments Road, more widely known as Oxford District, Accra’s hip downtown with bustling shops, handicrafts, fabrics, hotels, restaurants, etc..

Ghana’s second city Kumasi, is the traditional capital for the Asante people, heirs to a centuries-old kingdom that once sprawled from its core in central Ghana into what are nor Cote d’Ivoire, Togo and Burkina Faso. Better known to outsiders as Ashanti, Asante was the last and most enduring of a succession of centralized states that controlled the goldmines of Obuasi, though its wealth and influence was also linked to the ample supply of captives it provided to coastal slave traders. Traditional Ashanti landmarks include a beautiful 300-year old fetish shrine at Besease, the royal kente weaving village of Bonwire, and Manhyia Palace, where the Asante King sits in session every sixth Sunday, heralded by a procession of dignitaries and a fanfare of exuberant drumming and horn blowing that capture the pageantry of Asante’s past.

There is also the coastal Fante Kingdom, Asante’s southern counterpart and traditional rival, centered on Mankerssim and incorporating the ports of Cape Coast, Elmina, Anomabu Saltpond and Winneba, where local fishermen still ply their trade in colourful pirogues, and life is ruled by the whimsical winds and tides of the ancient Atlantic. The north of Ghana, by contrast, has strong cultural links to the sandy Sahel, clearly visible in the local style of dress, a strong Islamic influence dating back to mediaeval times, and the captivating mud architecture of villages such as Paga, Sirigu and Larabanga.