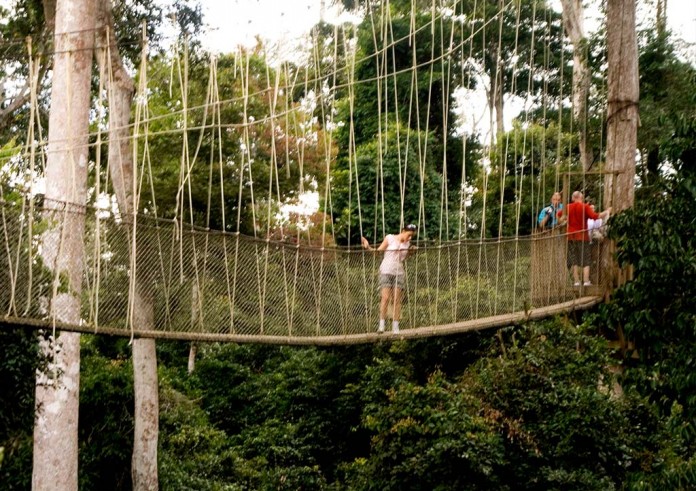 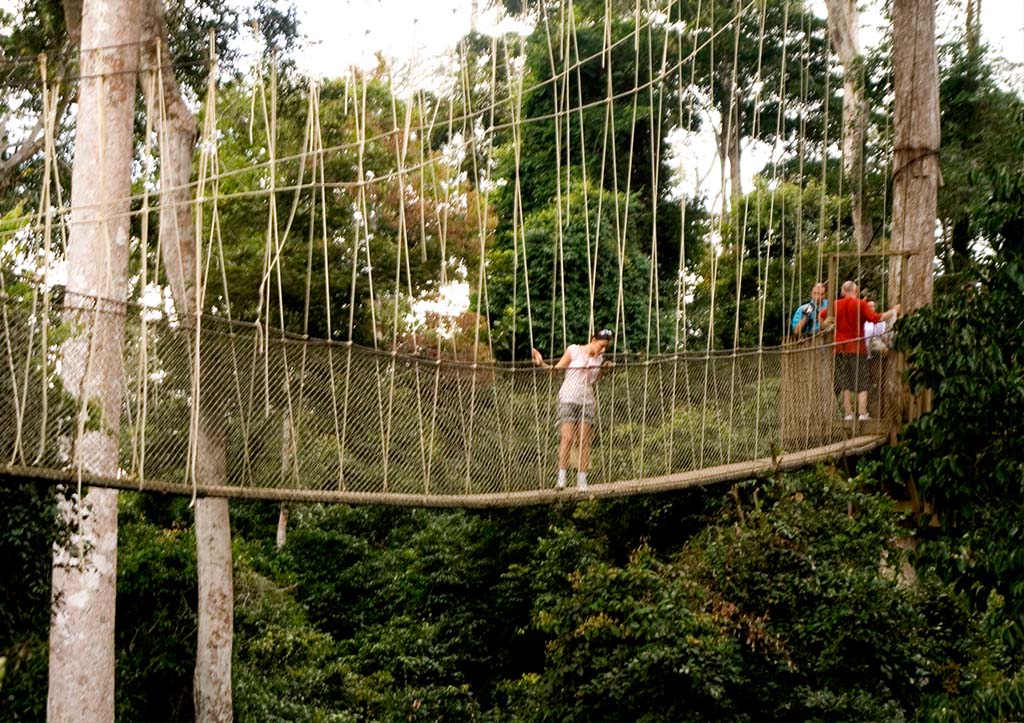 Kakum covers an area of 350 square kilometres, including the Assin Attandanso Resource Reserve. The vegetation includes tall hardwood trees that virtually dissolve into the sky at 65m in height. The Kakum National Park has several trails linking the most interesting features of the forest where guides will tell you a lot about the interesting trees and plants, their cultural and ethnic uses, economic values and local stories and proverbs about them. The nature trails are a must for you. The wildlife endemic in Kakum includes porcupines, squirrels, olive colobus monkey, black and white colobus, the red river hog and tree hyrax. Butterflies and birds abound in Kakum, while night tours may bring visitor into encounters with the shy forest elephant.

Canopy Walkway: The key attraction of Kakum, is the tree canopy walkway, that enables you to walk over the high tropical forest on a swinging bridge measuring almost 500m long among the tallest trees. The canopy walkway receives over 120,000 visitors a year and is one of the only six in the world.
The drainage of Kakum is very rich and several rivers and cascades, including the Kakum River that supplies water to Cape Coast municipality and surrounding areas.

You can visit Kakum all year round, but especially from March to August. Kakum may be reached by public transport from Pedu junction in Cape Coast.  Wear light summer clothes and strong running shoes or boots.

Kakum has an interesting visitor interpretation centre, a T-shirt printing facility that puts your pictures on your T-shirt, and a gift shop managed by the Aid-To-Artisans Ghana, an NGO that supports rural craft producers.

Kakum is conveniently close to Cape Coast and Elmina, where oldest European buildings south of the Sahara may be found: the over five hundred years’ oldest castles and forts that dot Ghana’s coast. A few kilometres before reaching Kakum is the Hans Cottage Botel where visitor may observe and feed crocodiles in a large pound over which the restaurant and bar are built on stilts. The Cape Coast and Elmina municipalities also have some of Ghana’s most colourful festivals, the Fetu celebrated in May Cape Coast and the Bakatue of Elmina.