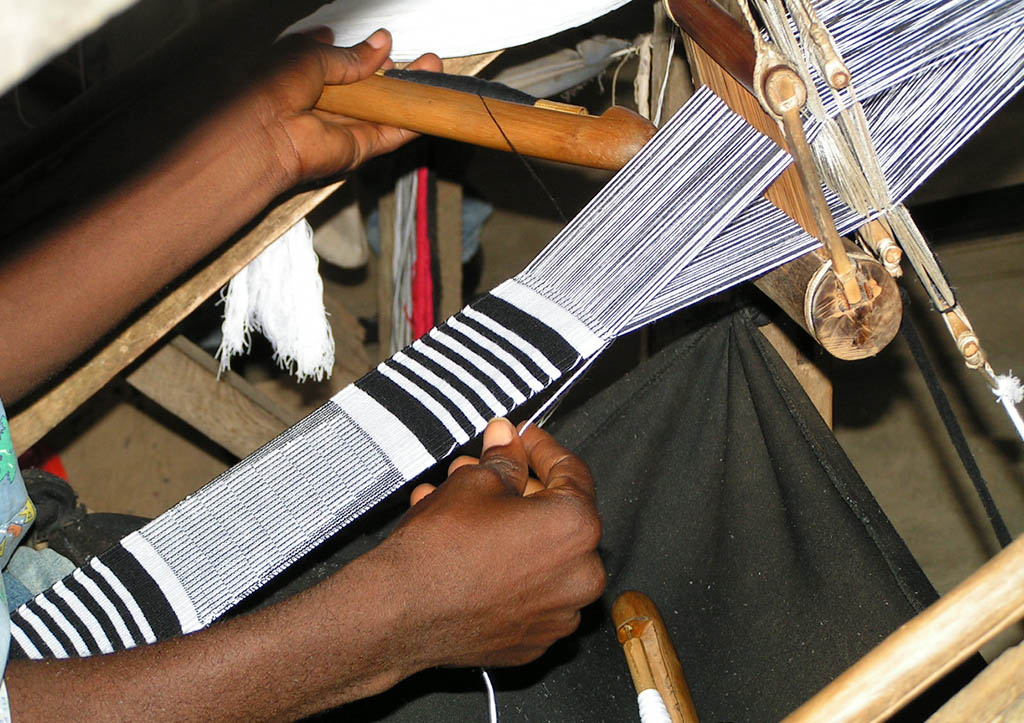 Bonwire is located 18km on the Kumasi-Mampong Road, Bonwire is popular for Kente weaving.
Kente is a colourful Ghanaian traditional fabric which is worn mostly on important occasions and celebrations.

Kente was developed around 17th Century A.D by the people of Asanti the Kingdom; it can be traced to the long tradition of weaving in African dating back to circa 3000 BC. The origin of Kente is grounded in both legends and history. For the legend, a man named Ota Karaban and friend, Kwaku from a town called Bonwire (a leading town for the production of Kente in Ghana) had their weaving lessons from a spider that was weaving its web. They tried to do same by weaving a beautiful raffia fabric. They later told their story to the Nana (Chief) Bobie, who intend passed on the important news to the paramount chief of the Ashantis- the Asantehene. The Asantehene did not hesitate adopting the fabric for all Asantis as a national cloth for special occasions like funerals, festivals, naming ceremonies and marriage ceremonies. Afterwards the production was improved but the name was retained which subsequently became “Kente”. It is also held that Kente was design originally from Bonwire. Bonwire is located 18 km off the Kumasi – Mampong road. It is a settlement with hundreds of Kente weavers.

Historically, the origin of kente weaving could be traced to the traditions of the ancient West African kingdoms between 300 A.D and 1600 A.D. Some historians are of the view that Kente is a development of various weaving traditions that existed around the 17th century. Nevertheless, while the Kente Cloth may have its origin from around the 11th century of West African weaving traditions, the art of Kente weaving developed earlier in Africa. In some parts of Africa, archeological excavations have revealed weaving instruments like spindles whores and loom, weights in early Moroe Empire.

Kente, now Ghana’s national cloth is one indigenous handicraft that has won world wide recognition. There are many types of Kente each with its own symbolism and name, which tells the history, culture and social practice of the weavers of the cloth. As declared a national cloth on the attainment of independence on 6th march 1957, Kente is used for different purposes and at different functions. It is important to note that Kente is used not only for its beauty but also for its representational imperative. The weaver derive names and meaning from moral values, oral literature, philosophical concepts, human behavior, individual achievements, animal life, proverbs and social code of conduct.

The aesthetic beauty of a kente cloth is affected by the colour symbolism. Colours are chosen for both their symbolic effect and visual effect. A weaver’s choice of a colour may also be influenced by his tradition or a matter of preference. Gender plays a key role in the selection of colours as women prefer pink, purple, light yellow and light blue etc while males cherish black, dark blue, dark yellow, orange, red and dark green.

There are about 50 types of Kente patterns with the most reputable and expensive of all the patterns in the Asanti culture being “Adwene asa” which is translated as my skills are exhausted. It is indeed the last word in the Kente cloths, one in which the strips join all the known designs. It was created only for the kings of Asanti and only one master craftsman can weave it. Sometimes weavers compose new designs of honour. Example is one called “Fathia Fata Nkrumah” meaning Nkrumah merit Fathia was created in 1960 for Ghana’s first president Dr. Kwame Nkrumah and his Egyptian wife madam Fathia.

A variety of hand woven Kente fabrics are obtained in many of their local shops at Bonwire. Kente is woven on ancient hand looms. They operate the loom with their hands and feet. The needle, which tread the wrap are placed between the toes. A shuttle passing from the left hand to the right hand in deft movement inserts the weft. Simultaneous with the action comes the Kente loom music, a well known noisy Kro-hin-kro … Kro-hin-kro. This rhythm made by the reverberating shuttle as they entwine the coloured yarns smoothly over one another to produce the dazzling double – weave strips of cloth, eight feet long by four inches wide. The strips are sewn together to make the required sizes.