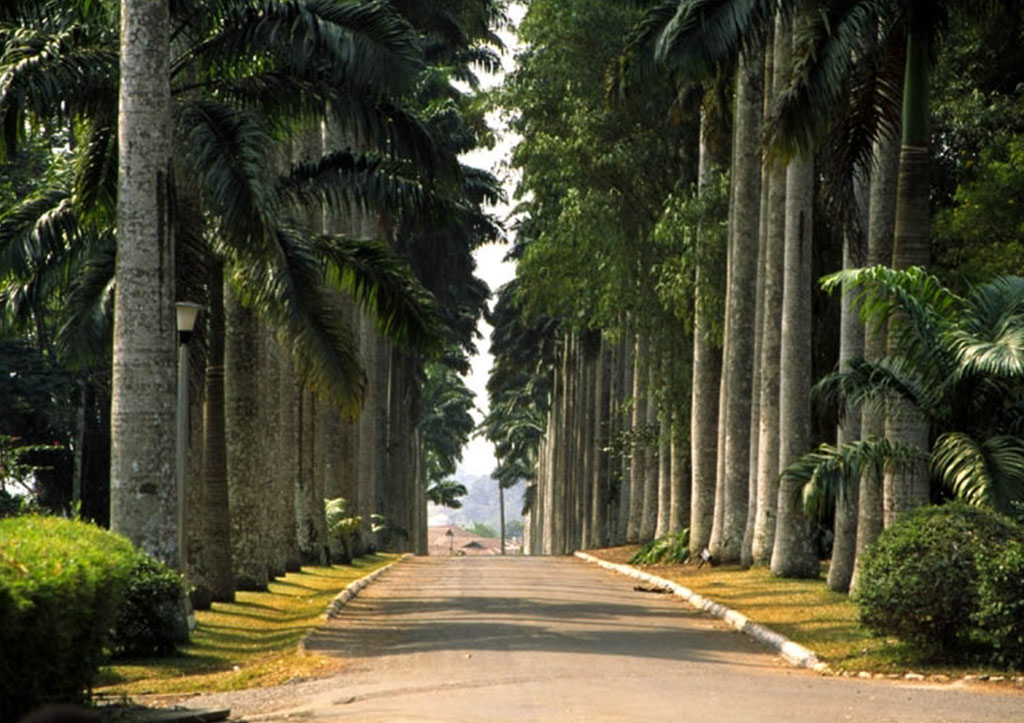 Aburi is located on the Akwapim-Togo Range of Ghana. It’s just three quarters of an hour drive from Accra, the capital of Ghana. The cool mountainous weather of Aburi makes it a destination for people who love the cool side of life. Located in this cool tranquil environment is the Aburi Botanical Gardens. The garden covers a total land area of about one hundred and sixty (160) acres. However it is only three (3) acres that have been developed and the remaining serving as a botanical reserve.

The House of Commons in London in the year 1842 recommended that a garden should be established on the mountains of Aburi. But tried as they could, this first attempt did not come to any fruition. Another attempt in 1865 to establish the garden was also not successful either because the powers that be at the time did not see the need for such expenditure to create a garden far away from home or sheer lack of interest all together. But in March 1890, upon a third attempt, the idea was accepted and this led to the establishment of a garden at Aburi. Why Aburi was chosen over other places such as Amedzofe which also offers the same cooler conditions and had been occupied by the Germans is something that needs exploring. Could they have chosen Aburi over the other mountainous regions of the Gold Coast because it was already home to the British sanatorium? Plausibly! This is because before 1890 the Gold Coast government had constructed a sanatorium at the site in 1875 for government officials who were recuperating. This place later became a something of a holiday retreat for the British colonial masters.

Prior to 1890, a year earlier, under the supervision of a German Basel Missionary and during the governorship of His Excellency, Sir W. Brandford-Griffith, K.G.M.G. some hectares of land were cleared for the start of the gardens. In 1890, Mr. William Crowther (Royal Botanic Gardens, Kew) was appointed the first curator of the garden. His grand ideas to transform the parcel of land around the sanatorium into a famous garden resulted in the cultivation of 6.8 hectares of land by 1902. His application of botany an area that he had specialized in as student could clearly be seen with the demarcation of the land into three distinct plots for the cultivation of three groups of plants: economic plants, botanical specimen and decorative plants.

The early toils of the forbearers have not gone to waste since today at Aburi stands a beautiful botanical garden that is among the 1800 of such kinds in the world with the primary purpose of preserving and conserving what is left of the earth’s rare plants species. It can be said without any shred of doubt that Aburi Botanic Gardens is one of the most fascinating places to visit in Ghana.

To reduce the features of this garden to just seeing of plants will be a great undervaluation of the essence of the garden. This garden offers edifying, aesthetic and spiritual experience for all groups of people. And this becomes very important if one consider the fact that human beings have been genetically coded to remain closer to nature and draw from it healing, peace and replenishment their energies.

On a visit to the garden, the first thing that graces you is the beautifully lined royal palm trees (roystonea regia) on both sides of the road leading to the car park. These palm trees cannot be said to be part of the original plants that were cultivated but look very old. You do not have to worry about authenticity because there are some original species of plant that can still be found there; the silk cotton tree (ceiba pentrandra) is an example. This tree is said to be the only survivor of the original forest that once covered the Aburi Hills.

In fact the silk cotton tree is acclaimed to be one of the biggest trees in West Africa (how they came to that conclusion is not know). But the sheer girth of about 5-7 metres and a height of about 48 metres indeed make it one of the biggest in the sub region. It is not surprising to see tour guides asking people to form circles around the tree to demonstrate how big the tree is. To add to the growing attributes of the cotton tree, many people in the sub region believe it is a sacred tree and therefore revere it.

One significant thing with all flower bearing plants is the fragrance that they leave behind and Aburi Botanic Gardens is not to be left out. The sweet scents and aroma from some of the carefully selected both exotic and local plant species is something to behold.

You need not be gobsmacked with these scientific names. The knowledgeable tour guides on duty will take you through all the names and sometimes provide local names as well. On my visit to the place I was surprised to find the nut meg tree in the garden (I cannot remember the scientific name now though!). One plant species that visitors to the garden should not miss is the mimosa pudica. It is a very sensitive plant that literally recoils into its shell by the slightest contact.

On arriving at the bush house, one will find the bamboo citadel. These are very beautiful highland bamboos which have formed a nice canopy.

Bird and butterfly lovers are not left out of the experience. The abundant life of different species of birds and butterflies makes it an ideal place for you. The birds come so close that one nature lover described the whole experience in the following words: “they come so near that sometimes you feel they want to perch on your head”.

Aburi Garden also features other interesting things that should draw visitors to the place. First amongst the lot is the serene atmosphere that the garden provides for picnic lovers. On any of the national holidays, it is not surprising to find lots of people travelling from far and new just to have their picnics there.

Other features that should attract you are the Bush House, the Rock Garden, the Pergola or Lovers’ lane, the retired helicopter, the ficus tree and the horticulture school.

The VVIP garden is another place to make a stop. This place has trees that have been planted by dignitaries who have visited the garden and to leave a lasting memorial, they planted trees to “enshrine” their visit. Among them are Queen Elizabeth II who visited in 1961, Gen I.K. Acheampong in 1973, Prince Charles in 1977, and Gen Olisegun Obassanjo in 1979.

A recent addition to enhance the stay of visitors and especially bikers to the place is the bike hiring services operated by a native of Aburi. The operators of the service will provide you with a guide map of the area. With the map and your bike, the only limitation to your exploration of Aburi will be your level of imagination and the desire to explore.